Protect and Preserve your Records for Long Life

Your new records can be completely protected from wear damage. Further damage to your previously played records can be stopped. Shock-waves are the primary cause of record wear. Dirt and friction exacerbate the problem. Even new, clean records are subject to shock-wave damage.  LAST’s scientists have discovered how you can protect your records from the damage caused by shock-waves, dirt, and friction.

The record manufacturing process leaves behind pressing residues and contaminants on the record surface. These sticky residues are tightly bound to the groove wall and attract and hold dirt and debris. Furthermore, they build up on the stylus as the stylus traverses the groove wall creating noise, distortion, and damage from wear. The usual water or water/alcohol mix record cleaner cannot remove these tightly bound contaminants and residues.

LAST Power Cleaner is a record cleaner specifically designed to remove pressing residues and contaminants left over from the manufacturing process. Just one cleaning with LAST Power Cleaner results in a record surface that is pristine.

Routine maintenance record cleaning prevents abrasion damage that is caused when dirt and debris that have collected on the on the record surface are dragged against the groove wall by the stylus.

LAST All Purpose Record Cleaner is is the most advanced everyday record cleaning solution available. It is an economical and highly effective way for general purpose cleaning operations.

So for standard record cleaning solutions used in either in manual or vacuum machine operation, the integrity of the treatment is not compromised.

2. Preserve and Protect Against Shock-Wave Damage

Once you have a clean record, you can totally protect it from the effects of stylus-caused shock-wave damage by applying LAST Record Preservative.

LAST Record Preservative chemically enhances the molecular stability, and therefore the cohesiveness of the groove surface so that it completely resists the effects of stylus shock waves.  The 30-second treatment affects the vinyl to a depth of about ten molecular layers and becomes part of the grove wall.  It leaves no surface residues to be picked up by the stylus. In fact, overuse is harmless.

A new record that is treated with LAST Record Preservative, kept clean, and not physically abused can be played a minimum of 200 times without discernible wear. A record treated today should be in pristine condition for future generations.

3. Clean Your Stylus to Protect Against Abrasion 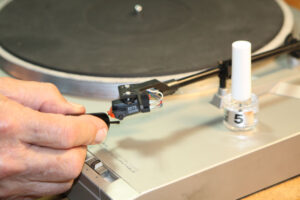 A clean stylus protects your record from abrasion damage caused by dirt that has adhered to the stylus tip.

LAST Stylus Cleaner chemically cleans the stylus. It removes all accumulated deposits and particles. It is completely safe for all stylus and cartridge assemblies because it contains no alcohol or other components that can damage the stylus suspension.

Recommended stylus cleaning frequency: Clean the stylus after the end of playing a succession of records so that you start with a chemically clean stylus the next time you want to play records.

Also, clean your stylus anytime you see any visible debris or hear any playback distortion.

Stylast Stylus Treatment dramatically reduces the friction at the stylus/groove interface by reducing the surface free energy of the vinyl. Stylast uses the same thermodynamic principles that led to LAST Record Preservative resulting in:

Stylast is not a lubricant and leaves no residue. It is effective throughout the entire play of one side of an LP record. There is no danger in over-applying Stylast to the stylus.

Recommended usage: Apply Stylast just prior to every play.